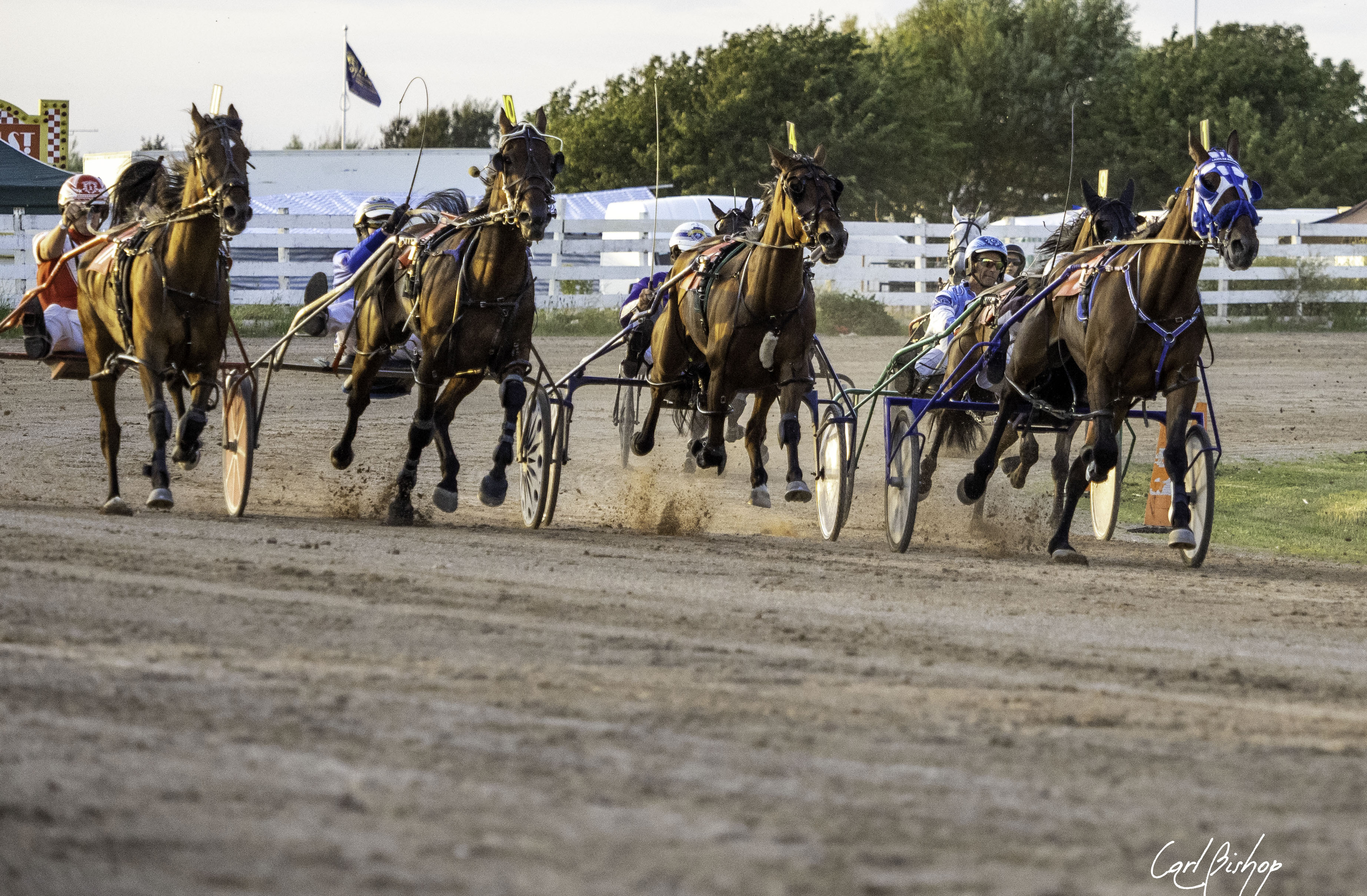 Pacing is a lateral gait in which the horse moves the legs on the same side back and forward together. Most pacers wear hopples – straps on the connecting the fore and hind legs on the same side. Pacing, or ambling is a natural gate for some breeds of horse (as well as giraffes!) and is faster that trotting by roughly 3 seconds per mile.

Trotting is a diagonal gait in which the left front and the right rear legs move forward almost simultaneously, followed by the right front and the rear left. Trotting is the natural gait for most horses and it is the only gait allowed by harness racing authorities in many European countries.

The Sulky is the carriage on which the driver (jockey) sits. The driver balances on the sulky with legs along the shafts to maintain perfect equilibrium. The design of the sulky combined with the way the driver sits on it ensures optimum performance from the horse with surprisingly little handicap to the horse’s performance.

At Tir Prince all races are mobile starts. Competitors slowly pick up speed behind a motorized vehicle that has ‘wings’ attached at the rear to form a barrier. The horses are released at full speed (approximately 30 mph) at the start point and the vehicle accelerates away.

The sport began when the horses that delivered the post in America in the 1800s were made to race against each other. But it really took off properly with the coming of the first and most famous harness racing horse, Hambletonian, in the 1850s.

In those days, the horses were trained to do a mile in two and a half minutes – that is the standard speed for a standard bred horse. Most of the horses in harness racing today come from the bloodline of the stallion Hambletonian. They are known as standard bred, as opposed to thoroughbred like flat or steeplechase race horses.

The sport has become more popular throughout the world than thoroughbred racing, except in the UK. We don’t have riders, but drivers, as they have a ‘sulky’ – an old name for the cart.

Popular all over the world

The French have a derivation of harness racing called ‘le trotter Francais’. Most of the horses in Europe trot as opposed to pace like in North America, Australia and New Zealand. Pacing is at the moment faster than trotting – it’s all in the way the horse moves its legs, though they say trotting is a more natural gait for the horse.

At the moment, there’s about a three second difference over a mile between the best trotters and pacers in the UK.

Tir Prince in Towyn, the only full half-mile, floodlit hard track in the country.

Harness racing has been going in Wales for over 100 years, traditionally raced on grass tracks. But they’re more dependant on the weather, so now there are four hard or all-weather tracks in the UK, two of which are in Wales – Ammanford Valley and Tir Prince in Towyn, the only full half-mile, floodlit hard track in the country.

The sport has been traditionally one for farmers in the UK – it was a relatively cheap sport for those who kept the odd horse and it was very much for amateurs. Now it’s been taken up by small businessmen or people who just love horses.

The market is now closed. We would like to thank everyone who traded here this season but unfortunately the 2021 season is now at...

The online booking system is now live for market traders to book their pitch for this Saturday 27th November 2021.

Tir Prince is the North West’s leading Harness Raceway. Join us through May to September for our 2021 season, and experience all the fun and excitement!
Read More